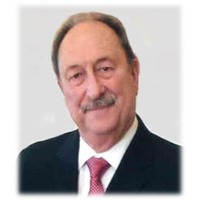 William J. “Bill” Semeraro, 80, longtime resident of Oakville, entered into the gates of heaven after a courageous battle with pancreatic cancer at his home, surrounded by his loving family on Tuesday, April 12, 2022. He was the loving husband to the late Dolores (Rio) Semeraro and the longtime companion of Jacqueline Hoffman for over twenty-eight years.

Bill was born in Waterbury on May 2, 1941, son to the late John and Mary (Popovich) Semeraro. Bill grew up in Oakville and after graduating high school, went on to bravely serve his country by joining the United States Navy. After an honorable discharge, Bill worked as a machinist for Winchester Electronics and worked for Shaker’s Auto Group for many years as service manager.

From a young age, Bill had an immense love of cars. With his brothers, Bill was always tinkering on cars and motorcycles, whether it was building or restoring them. He enjoyed going on week-plus long trips on his motorcycle with his friends, often completing over a thousand miles per trip. It brought Bill great joy attending various car shows over the years with friends and family with his 1952 Mercury, known as “Pinky”, always getting much love from spectators with its bright pink and white two-tone paint job. Bill also loved listening to country music, line dancing and being “Poppy” to his grandkids.

Bill leaves behind to cherish his memory his beloved Jacqueline “Jackie” of Oakville, as well as, Diana Parness of Wayne, NJ, Elizabeth DeCicco and her husband Joseph of Cheshire, as well as his siblings, John Semeraro of Oakville, David Semeraro and his wife Elizabeth of FL, Ronald Semeraro and his wife Jane of FL, and Karen Oliva of Watertown. He also leaves behind his six grandchildren, Eric Parness, Sarina Marra, Sara Parness, Alexis Parness, Norah DeCicco, Piper DeCicco, as well as many loving cousins, nieces, and nephews. He was predeceased by Dolores Semeraro, his son, Jason Semeraro, and his two brothers, Pasquale and Michael Semeraro.

Arrangements: Calling hours for Bill will be held on Tuesday, April 19, 2022, from 3:00 – 6:00 p.m. at Chase Parkway Memorial, the Albini Family Funeral Home, 430 Chase Parkway, Waterbury, CT 06708. A prayer service will conclude the calling hours at 6:00 p.m. Entombment at Evergreen Cemetery Columbarium will be held privately and at the convenience of the family.