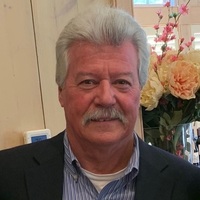 THOMASTON- Mark “Ski” Wisausky, 70, of Thomaston, died Tuesday, December 14, 2021, at his home. He was the husband of Barbara (Werner) Wisausky.

Mark was born in Waterbury, August 4, 1951, the baby of six children born to the late Albert and Rita (Grenier) Wisausky. He was an avid bow hunter. He got his deer this year after a few years of sitting in trees looking at squirrels. He will be sorely missed by his hunting brothers, Kenny Moody, Davey Lampron, Johnny Bellerieve, Tommy Harrison, and George Barnes.

He was predeceased by his brother, Tom Wisausky. In addition to his wife of 18 years, he leaves his siblings, Lee Wisausky of Oakville, Lorraine Marti of Burlington, Carol Carey of Plainville, and Joanne Chapin of Oakville. He was the loving stepfather to Eric Hickcox of Torrington, Jeff Hickcox of Washington state, Heidi Hickcox of Bridgeport, and Mandy Gann of Atlanta, GA; and “Papa Ski” to six grandchildren. He also leaves several nieces, nephews, and so many friends that it would take up the whole obituary page.

Mark’s passion was NASCAR. He drove a race car in his younger years at the Danbury race track. He never missed a Cup race and loved to yell at the TV like they could hear him. Anyone who knew him, knows he’s standing at some bar with a Michelob in his hand!

Calling hours will be held Saturday, 4-7 p.m., at the Hickcox Funeral Home, 195 Main St, Watertown. Burial will be private and at the discretion of the family.