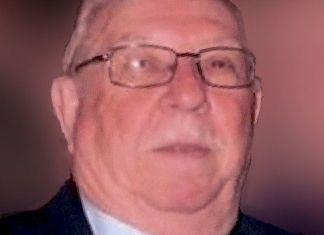 He was the son of Idella Mazerolle and was born in Burlington, Vt., on June 19, 1945. Jim served his country proudly in the U.S. Air Force for four years from 1964 to 1968. He worked at Electro for many years, and then went to painting and repairing cars when he retired.

Jim loved the old classic cars and went to many car cruises. The last car that he got was a 1939 Chevy which he wanted for many years. He owned that Chevy for about six years and greatly enjoyed it. He ran the 2018 and 2019 Mum Festival Car Show and had about 220 cars for each show, which was a great success and the people enjoyed going to the show.

Jim made many friends at the car show and friends outside of the shows. Jim had two close friends, Paul Hinman that he talked to almost every day. The other was Ken Meehan of Ken’s Grille which Jim loved his hot dogs with meat sauce. Jim had a great neighbor, Patrick Claar, that anytime he asked for help he was there to help out.

He is survived by his wife, Beverly (Bailey) Foote; his brothers, Reginald Foote and his wife, Judy, Jeffrey Mazerolle; his brother-in-law, Robert Bailey and his wife, Sophie; a close cousin, Pauline Niquette of Burlington, Vt.; and many nieces, nephews, great-nieces and great nephews whom he loved very much. Jim was predeceased by his mother, Idella Mazerolle; his mother-in-law, Lorraine Bailey; his father-in-law, Robert Bailey, and two sisters-in-law, Dolores Bailey Patterson and Allison Bailey Burritt. His wife would like to thank the nurses and doctors from the Bristol Hospital for the great care they gave him while in ICU.

Calling hours will be 1 to 3 p.m. Saturday, Feb. 6, 2021, at O’Brien Funeral Home, 24 Lincoln Ave., Bristol, with military honors to be accorded at 3 p.m. Please adhere to all current COVID-19 protocols during visitation.

To view the livestream webcast, or leave a message of condolence or share a memory or photo, please visit James’ memorial tribute at www.OBrien-FuneralHome.com