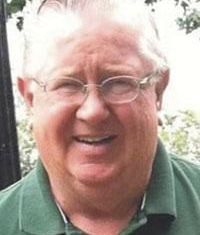 WATERBURY – Thomas O’Leary, a native son of Waterbury who served his country in the Navy, had a distinguished 34-year career at Ulbrich Stainless Steel and was above all else adored by family and friends for his bottomless optimism and kindness, passed away peacefully on July 6, 2019, at the age of 75.

Tom was born to the late Thomas F. O’Leary and Mary Byron O’Leary on Oct. 1, 1943. Known as Red in his youth, he graduated from Croft High School, and upon graduation enlisted in the Navy where he proudly served for four years, traveling all over the world. Tom attended Post College and continued his service in the Navy Reserve for another 20 years. He also worked in the U.S. Foreign Service. At Ulbrich, he served as the personnel director, but his true role was mentor, counselor and dedicated friend to all in the Ulbrich community.

Tom’s hobbies included motivational speaking on the power of positive thinking; golfing; fishing; teaching his grandchildren how to fish; and collecting watches, clocks and many other “treasures.”

Tom truly believed that everyone was worthy of respect and love, and he lived those beliefs beyond words. His faith in redemption even extended to people he didn’t know, as was the case when, years after the Watergate scandal, Tom wrote a note of encouragement to Richard Nixon. Sadly, that letter is not preserved, but the former president responded with a handwritten note of thanks that survives. That letter could have been written by each of the thousands of people who were lucky enough to have met Tom O’Leary.
Tom’s funeral will be Friday, 10 a.m. from Maiorano Funeral Home, 95 Willow St., Waterbury, to Blessed Sacrament Church for a Mass at 11 a.m. Burial with full military honors will follow in Calvary Cemetery. Family and friends may visit with Tom’s family on Thursday from 5 to 8 p.m.