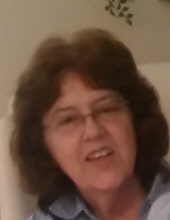 After a short illness, Lucille passed peacefully on to her heavenly home at 7:22 on Thursday evening, March 28, 2019. She was surrounded by her family members and her cats. Born in New Haven, she grew up in North Branford and had been a resident of Guilford since 1966. Lucille married Wayne Sharp Sr, of Northford, in 1964. She was the loving mother of Doreen Forest (Rick), also of Guilford. She was pre-deceased by her son Wayne Sharp Jr. in 1985.

Proud grandmother to Kaitlin Pazera (Rob) and Joshua Forest (Nicole), and an especially proud Great Grandmother to Sawyer & Spencer Pazera. Lucille is survived by a sister – Jeanne DeConte; a brother – Toney DeConte (Debbie); and a brother-in-law Bill Sharp, and a sister-in-law Diane Wasilewski, and many nieces, nephews and cousins. She was predeceased by her brother David DeConte and her parents Emma DeConte Handlowich and Toney DeConte.

Lucille enjoyed the woods, the mountains and being outdoors. Her cats were constant companions at home. She enjoyed creating her flower gardens and watching the many birds that visited at her feeders. She devoted much of her life to volunteer service for many organizations. She enjoyed working in support of the Silver City ¼ Midget Club, serving as both Secretary and Head Scorekeeper. She also served many years as a 4H Leader and Cub Scout Leader. CT Recycled Teenage Cruisers brought her much joy. She also enjoyed planning the car cruises held at Marty’s restaurant in Westbrook and the Labor Day Cruise held at the Elks Club in Westbrook. She served many years in volunteer positions at both the North Branford and North Guilford Congregational churches. She was a member of Kings Daughters at the North Guilford Congregational church.

Friends are invited to calling hours on Friday, April 5 from 5 – 7 pm at the Guilford Funeral Home, 115 Church St, Guilford. Funeral services will be held on Saturday, April 6 at 11 am at the North Guilford Congregational Church, 159 Ledge Hill Rd, Guilford. Burial will follow in North Guilford Cemetery. Per Lucille’s request casual dress, no suits! Thank you
In lieu of flowers, the family requests that donations be made to either: Branford Compassion Club (an animal shelter in North Branford); 2037 Foxon Rd, North Branford, CT 06471 or St. Jude Children’s Hospital, 501 St. Jude Place, Memphis, TN 38105.