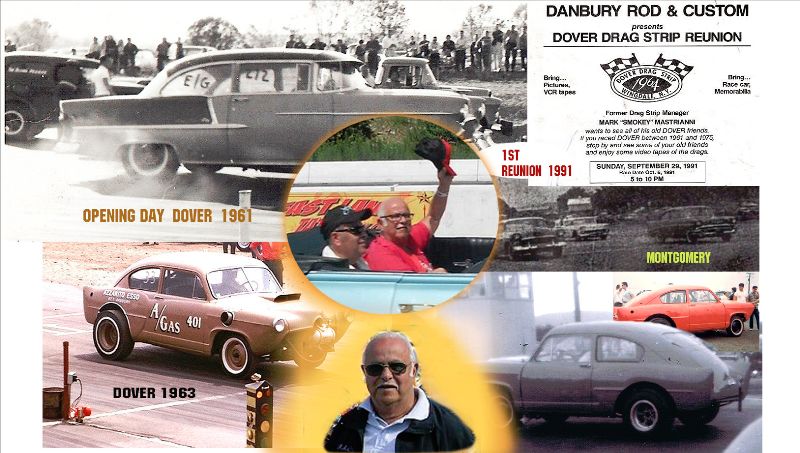 Mark “Smokey” Mastrianni left us last night. He inspired us all, reviving Dover Drag Strip memories with his Dover Drag Strip Reunions, starting in 1991 in Danbury. If it wasn’t for his vision to revive Dover, with his sidekick, James ‘Grover’ Grove, Dover would have been forgotten. The Dover Drag Strip Website & Forum ( online in 2008) is testament to that.

The Reunions sparked the Dover Gang to go Racing Again, creating the first Dover Drag Strip Nostalgia Drags in 2008 at Island Dragway. Mark Was a Member of the Danbury Modifiers. They first raced at Montgomery Airport, with their Club Car ‘Alley Oop’. Mark ran his Street and Strip ’55 Chevy gasser. You see, if it wasn’t for Mark, there would have been no Dover Drag Strip.

One Sunday, around ’59 or ’60, he took a gas station owner (Chet Anderson )from Brookfield to the track. Chet wandered around taking notes, while Mark ran his car. He was so impressed by this new drag racing thing sweeping the country and had an idea. Upon returning home, he began the planning for Dover in Wingdale, N.Y. In 1961,Dover opened with overwhelming success. The stands were packed and the roads were clogged. Mark became Chet’s first Manager, with fellow Modifiers club members as ‘officials’. That’s where Smokey met James Grove (Grover). Grover was the first paid entry to the track and still has the ticket stub to prove it. Mark brought him on later to run Tech, where their partnership evolved. Mark ran His ’55 on opening day and went on to build a Henry J Gasser. So “Grandpa Dover” he is…actually the founding father contributor to the Dover Saga, starting a never ending remembrance to this day.

I first met Mark at my Summer Cruise Night in Bethel way back in 1981. I saw this guy walking around with a Dover Drag Strip jacket that said Manager. Who was this guy? When I came on board at Dover to announce in ’67, Mark had left the racing scene around ’65 to raise and take care of his wonderful family. I approached him and got an earful of Dover history. He knew everyone. He came to the cruise night every week with his’ 59 Chevy, along with his fellow club members, the Danbury Rod & Customs. That Club Started The Dover Reunions and it still runs today, being the longest running track reunion in the country.

Over the years he and his family have become regulars at the Dover Drag Strip Nostalgia Drags, even some racing….Sons,daughters-in* law…there’s a bunch. We regularly would talk on the phone, with Mark keeping me updated on all the Dover Guys. I’ll always remember his always positive attitude, smile and infectious chuckle. They don’t make many like Mark…A true passionate family man with old school values. I already miss my buddy ….You Go Mark …say hi to all the lost Dover Guys.