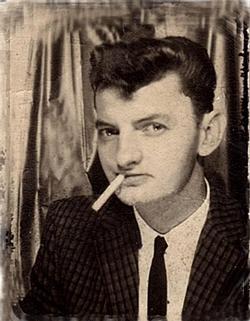 J.B. was born on March 26, 1940, in Waterbury, son of the late George W. and Gertrude (LoVine) Bunnell. He was a 1959 graduate of Crosby High School and a proud U.S. Navy veteran. While he worked in inside sales for McGuire Manufacturing for 43 years his true dream job was his Rock and Roll Doo Wop Party radio program for over 40 years. Beginning on WNVR-AM and was followed by his fans when he moved to WWCO-AM and finally in later years to WATR-AM. He hosted and attended 50’s concerts up and down the east coast and because of his love of the music he was blessed to become friends with hundreds of performers and promoters thru the years and form special bonds with many of them. Kenny Vance, Kathy Young, Jay Siegel, Jon “Bowser” Bauman, Rob Albanese and Charlie Thomas to name a few. His goal was to keep the music alive. He was a proud member of The Meadow Social Club and The North End Gang as well as The Circus Fans Of America never missing a circus since he was 5 years old. He also was an avid Yankee fan and firmly believed that if he didn’t watch the game that they would lose.

The family would also like to thank Dr. Anamika Katoch, Karen Hammond and Candace Conway for the genuine love and caring they gave to him.

J.B. is survived by his devoted daughter and best friend Tracie Bunnell (Jerry Crawford) of Middlebury. Also by Marcie Keller (Greg Casey) of Waterbury; his granddaughter Mysti Griffiths (Matt Griffiths) and Jewelia and Jacob Crawford. As well as “adopted” daughters Cheryl “Squirrel” Guertin and Jen Belli. He also leaves his sisters Nancy Bailey and Suzanne Matthews, both of Waterbury as well as several nieces and nephews especially Marilee Perugini. He was predeceased by his brother George H. Bunnell.

Plans for a celebration of life will be announced in the coming weeks in the paper as well as social media. Memorial contributions in J.B.’s name may be made to: The John Bunnell Memorial Fund c/o TD Bank P.O Box 1083 Middlebury, CT 06762 or brought to any TD bank location. For more information and online condolences please visit www.maioranofuneralhome.com