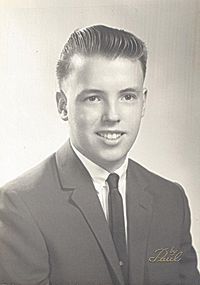 Born in Derby on June 26, 1949, he was a son of the late Henry and Beatrice (Scott) Kostka of Oxford. Ron attended Southbury High School, where he studied auto mechanics and engineering.

Among his hobbies, he enjoyed restoring vintage cars, especially from the late ’50s and early ’60s. Ron was a veteran of the war in Vietnam where he rose to the rank of military police.

He was a longtime member of the David S. Miles Post American Legion in Oxford, where he served for many years as post commander. He took comfort in the company of his fellow veterans.

He was predeceased by his brother, Henry Scott Kostka.

A memorial service in his honor will take place on Wednesday, Dec. 7, 2016 from 10 a.m. to 12 p.m. in the Ralph Hull Funeral Home, 161 West Church St., Seymour. Interment with full military honors will follow in St. Augustine Cemetery, Seymour.

For more information or to send an online condolence, please visit us at www.hullfh.com.