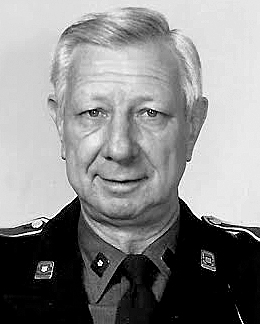 William R. Leonard, 84, passed away Saturday, October 15, 2016, in the arms of his loving wife and surrounded by his children and grandchildren.

He was born September 19th, 1932, in Scranton Pennsylvania, the son of William O. Leonard and Agnes Gerron. He is survived by his wife Nancy E. (McArdle) Leonard; his children, William L. Leonard (Catherine) of Bloomfield, Amanda Harang (Bruce) of North Branford, Jaime Habersang-Savino (John) of Madison, and Todd Habersang (Heather) of Windsor; his loving grandchildren, Jeffery Leonard (Nicole), Alexander England (Alexa), Jonathan England, Stephen Leonard, Samuel Harang, and Lily Harang. He is also survived by his sister-in-law, Judith (McArdle) Stanard, his brother and sister-in-law, James M. and Selina McArdle, and his sister-in-law, Penny Leonard, as well as many cousins, nieces, and nephews. He was predeceased by his parents, William O. Leonard and Agnes Gerron Balcezak, his brother, Robert M. Leonard, and his brother-in-law, Roderick D. Stanard.

Bill’s family relocated in 1941 to West Hartford, Connecticut where he graduated from Hall High School, Class of 1950. He competed in the Hartford Leagues of semi-pro baseball and football. In 1951, he was recruited to play as a pitcher for the Washington Senators AAA Farm Club in Winter Haven, Florida. Later he was a baseball coach for ten years in the West Hartford Boys’ League, leading his Fire Department Team to a championship in 1953. Bill proudly served his country in the United States Navy. He worked for the Royal Typewriter Company in Hartford, active in their industrial baseball team. He worked as the Parts Manager at Gengras Motor Cars, West Hartford, and later attended New York University and became a licensed stock broker for Shearson, Hamill & Co., a Wall Street brokerage and investment banking firm. At age 34, Bill pursued his life’s passion to become a Connecticut State Trooper. He graduated from the CT State Police Academy Class of 1966. He was a Pistol Sharpshooter and K-9 Handler. He was assigned to Troop F, Westbrook, then Resident State Trooper in Middlefield for 5 years, accompanied by his loyal police dog, Kurt. After graduating from the FBI Training Academy in Quantico, Virginia and Secret Service Dignitary Protection School, Sergeant Leonard was assigned Head of Security for Governor Ella Grasso, responsible for the Governor’s 24-hour Security Team. Upon completing his role protecting the Governor, he was assigned Commanding Officer of the CT State Police Welfare Investigation Unit. To his pleasure, he finished the last years of his CT State Police career where he began, Troop F, Westbrook, where his greatest enjoyment was mentoring the next generation of CT State Troopers. Following his retirement, he completed the Fire Marshall’s Certification Course sponsored by the State of Connecticut. He was appointed Fire Inspector for the town of Madison and achieved National Certification Level of Fire Inspector I. He was a member of CT Fire Marshals Association and the CT Chapter of the International Association of Arson Investigators. He went on to be one of the founders of the CT Association of Licensed Private Investigators, and established Leonard & Leonard Associates where he investigated insurance liability fraud until he retired again at age 80. Bill was a 25-year member of the Madison Democratic Town Committee, serving on several Town Boards. He was a member of the American Legion, a Board of Director of the CT State Police Alumni Association, and 4th Vice President of the CT State Police Museum. One of Bill’s passions was cars and auto racing. He was a member of Quarter Midgets of America and a member of both Silver City Quarter Midget and Little-T Quarter Midget Clubs. He was chief mechanic and handler for his children’s 3 race cars traveling to many states for national racing events. He was a member of American Motors Owners Association, and proudly held a 6-year term as President of CT Chapter of American Motors Association, presiding over the successful International AMC Show and Convention held in Boston, 2012. Bill was a 55-year member of the Masonic Fraternity, Hartford Lodge #88, then transferring to Madison Lodge #87. Bill was always the gentleman and a strong role model. He was a wonderful story-teller, and was always willing to share his knowledge with others. He had a passion for life, a heart as deep as the ocean, a warm empathy for all people, and a never-ending love of his God and family. He will be sorely missed.

The viewing will be held at Swan Funeral Home, 825 Boston Post Road, Madison, on Friday October 28th 2016 from 1:00pm – 8:00pm. Funeral services will be held on Saturday, October 29th at 10:00am at the North Madison Congregational Church, 1271 Durham Road, Madison, followed by burial at North Madison West Side Cemetery on Race Hill Road in Madison. In lieu of flowers, memorial donations can be made to the Connecticut State Police Museum, CSPAAAMEC, P.O. Box 1945, Meriden, CT 06450.