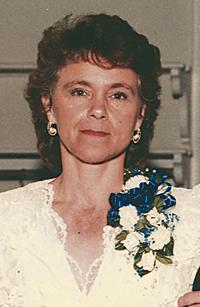 THOMASTON — Carolyn Louise (Kulmann) Oakes, 70, of Thomaston, passed away March 14 at her home surrounded by her loving family after a long battle with cancer.

Carolyn went to school in Waterbury and worked at Evelyn’s Luncheonette and 3 Of A Kind Restaurant in Waterbury before moving to Thomaston in 1997, where she worked at Patti’s Place and for Cook Willow Convalescent Home until she retired in 2009.

Before falling ill Carolyn was very active, she walked 3.5 miles every day, rain or shine. The thing she loved most was spending time with her family; she also really enjoyed shopping, her daughters took her to antiques stores, flea markets, tag sales and thrift stores every Saturday.

She enjoyed doing puzzles, painting plaster figurines and playing video games, as well as collecting memorabilia from her favorite Disney movie, “Beauty and the Beast.”

Carolyn loved horror movies and books, everything from Dracula to Stephen King. In her later years she enjoyed watching TV; “Family Feud,” “The Big Bang Theory” and “Downton Abbey” were some of her favorite shows.

A memorial service will be held at Mill Plain Union Church, 242 Southmayd Road in Waterbury on Sunday, April 3, at 2 p.m.

In lieu of flowers, donations may be made in her name to the St. Jude Children’s Research Hospital.