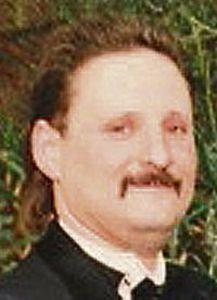 Augie was born December 9, 1961, in Waterbury, the son of Celeste (Silva) Fidalgo and the late August L. Fidalgo. Augie was a 1980 graduate of Naugatuck High School. He was a lifelong Naugatuck resident where he was employed as an Electrician at A. C. Electric. He was a car enthusiast, not just working on vehicles but attending many car shows.

Augie loved the outdoors and spending time with the Fat Bastard S.C. Augie always had a positive and outgoing attitude. He will forever be loved by his family and friends and never be forgotten.

The family would like to extend a special “thank you” to Beacon Brook and its staff for their loving care and support to Augie.

Arrangements: Funeral services will be held on Thursday, March 3, 2016, 10:15 a.m. from the Alderson-Ford Funeral Home of Naugatuck, 201 Meadow St. to St. Francis of Assisi Church for a Mass of Christian Burial at 11 a.m. Burial will follow in St. James Cemetery. Calling hours will be held on Wednesday from 5 to 8 p.m. at the funeral home.