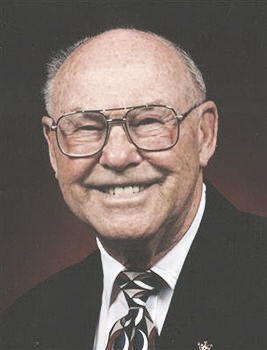 Visitation will be from 2 to 6 pm Sunday at the Egelhof, Siegert and Casper Westview Funeral Home and Crematory, 2659 Kennedy Road, where there will be a parish wake service at 5:30 p.m. Mass of Christian Burial will be 10 a.m. Monday at the Church of the Nativity, with Msgr. Jim Miller Celebrating. Burial will be in Mt. Calvary Cemetery where military rites will be accorded by American Legion Dubuque Post 6.

Bob was born April 23, 1921, in Dubuque, Iowa, son of Dominic and Mitilda (Datisman) Fisch. He graduated from Dubuque Senior High School and served in the U.S. Air Force during WW II. He worked at the Dubuque Packing Company for over 40 years and was a member of Local 150. He also worked part time at the Fenlon Place Elevator and volunteered at the National Mississippi River Museum and Aquarium.

Bob was involved in many things, and rarely took a break. He enjoyed watching the Dubuque Senior High School Girls Softball team and tried to catch as many games as possible.

He was a member of the Church of the Nativity, where he was active in choir, scouts, guild and Rosary Society. He served as Chairman of the Dubuque Housing Commission and Vice Chair of Dubuque Community Development Commission. He served on the board of directors of many boards, including Foster Grand Parents, Project Concern, Tri-State Independent Blind Society, where he served as Publicity Director, Chairman of River Valley Cap, Operation New View, Dubuque Regulatory Board and Dubuque Mental and Handicapped Board.

Bob was a member of American Association of Retired Persons and served as a team member for the 2nd district AARP/Vote, and AARP Community Council.

Bob was a member of the Democratic National Committee, Dubuque Democratic Party, Volunteer staff member for Sen. Tom Harkin and worked on the Senior Task Force, Dubuque Housing Coalition, the Consortium on Aging and Friends of the Community.