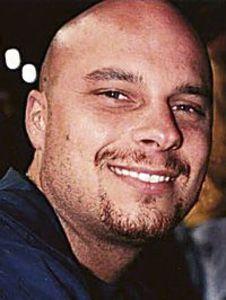 Tim was born in Waterbury on July 24, 1973. He was a resident of Watertown for most of his life. He was the son of Philip Dunn Sr. and the late L. Susanne Dunn of Palm Bay, Fla., whom he missed dearly.

The greatest love of his life is his son, Joseph Michael Dunn. He took pride and joy in being a part of his life.

He is survived by his brother, Phil Dunn of Torrington; his nephews, Dominic Dunn and Matthew Dunn, of Watertown; his grandmother, Johanna Lanteri of Waterbury; as well as many aunts, uncles, cousins and limitless friends.

He enjoyed helping his father, Philip, work on various projects. He spent a lot of time helping out in his father’s retirement community fixing and repairing things. He was a hard worker; no job was too big or too small.

Growing up he enjoyed playing soccer, building tree forts, working on his 1969 Nova, going to family picnics and hanging out with his friends. He was known for his smile, generous heart, love for NASCAR and Harley-Davidson Motorcycles.

Private services were held in Palm Bay, Fla. A memorial luncheon will be held in his honor 11 a.m. to 5 p.m. July 26, at the VFW, Veterans of Foreign Wars, at 866 Thomaston Road in Watertown. All friends and family are invited to join in a celebration of his life.