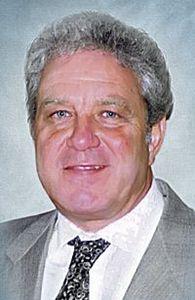 WOODBURY — Joseph Edmund Triano, 77, beloved husband of Dolores Triano, passed away peacefully at home on Tuesday, June 16, 2015, with his loving family by his side.

Born on Nov. 16, 1937, in Naugatuck, he was the son of the late Charles and Adeline Triano of Naugatuck. He was a very devoted and loving father to his three children. Family was his centerpiece. For him, the best days were when he was spending time with his children, grandchildren, and Dee Cannon Triano, the love of his life, who cared for him until his final day.

Joe was a founding member of Braxton Manufacturing Co. Inc. of Watertown, current chairman of the board of directors and past president and CEO. Joe started the company with Braxton Nelson in 1964. At that time he was working days as an automobile mechanic at Genest Motors in Cheshire. He worked for approximately three years at night with no pay, in order to get Braxton Manufacturing established. The company grew from just a small garage located in Woodbury, to one of the greatest eyelet manufacturing companies the world has ever known, with locations in Watertown and Tustin, Calif.

Joe raced stock cars at Savin Rock in West Haven. He had a love of classic cars and participated in many car shows winning several first prize trophies with his baby blue 1976 Cadillac Eldorado. Joe enjoyed playing golf, traveling the world with his wife, dancing, and listening to country music and the Golden Oldies. He especially loved Elvis Presley.

His family would like to thank Hartford Health Care, VNA and Hospice, and all the caregivers that have taken care of Joe over the past several years.

In lieu of flowers, memorial contributions may be made to Hartford Health Care VNA and Hospice, 50 Brookside Road, Waterbury 06708.