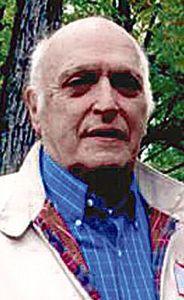 Harry grew up in Waterbury. He graduated from Leavenworth High School where he played baseball and basketball and was part of their All New England Basketball Championship team. After graduating high school, he joined the armed forces and served four years as a national guard and four years in the U. S Air Force where he was stationed in Japan and fought in the Korean conflict. He was employed by Waterbury Corrugated, The Lincoln Store and General Electric. He worked in the repair and service department at GE until his retirement in 1993.

Harry met and married the love of his life, Sophie (Dimo) Black. They were happily married for 45 years until her passing in 2004. Harry loved working with his hands. His proudest accomplishment was moving his young family into the house he built in Cheshire where he resided until his passing.

Racing and working on cars were some of Harry’s other interests. He raced the numbers 19 and 2 at various tracks including Savin Rock in West Haven and Riverside in Agawam, Mass. Once he stopped racing he could be found in the pits at the Plainville and Danbury racetracks helping his brothers and nephews with their race cars. Later in life he turned to restoring antique cars, and with his wife, Sophie, would travel around to local car shows where they enjoyed the company of other car enthusiasts. In recent years, he enjoyed going to breakfast on Thursday mornings with his brother, Bill, brother-in-law, Jack, and his nephew, Bill Jr.

Harry is survived by his two sons, Harry Black Jr. and his wife, Charlene, of Cheshire, David Black and his wife, Robin, of Waterbury, and his four grandchildren, Jessica, Melissa, Ryan and Brandon. He also leaves behind a brother, Bill Black Sr. of Oakville, brothers-in-law Jack Geary of Prospect, and Leo Dimo of Waterbury, and a sister-in-law, Fran Black of Myrtle Beach, S.C., along with many nieces and nephews.

Funeral Mass will be held 9 a.m. Saturday, May 23, 2015, at St. Francis Xavier Church, 625 Baldwin St., Waterbury. Friends are asked to meet directly at the church. Burial with military honors will follow in Cheshire Hillside Cemetery, Cheshire. Friends may call from 5 to 8 p.m. Friday at the Murphy Funeral Home, 115 Willow St., Waterbury.

Visit www.murphyfuneralhomect.com for more information or to send an online condolence.