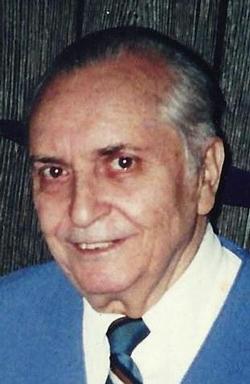 Mr. Rocco Ciavarella, age 94, passed away peacefully surrounded by his family, on Thursday, April 9, 2015 at Village Green of Waterbury, where he has resided for the past five years. He was the loving husband of Julia T. (Monti) Ciavarella.

Mr. Ciavarella was born on September 12, 1920, in Foggia, Italy. He was the son of the late Rocco and Felicia (Ciavarella) Ciavarella. Rocco came to America in 1941. He was a talented shoemaker and the owner and operator of Victory Shoe Repair for over 50 years until his retirement in 1983. Rocco was a member of the Knights of Columbus for many years. He enjoyed gardening and playing cards with his friends. He loved to bowl and play bocce ball and belonged to different leagues for both over the years. He was a devoted family man and spending time with his family was his greatest joy in life.

In addition to Julia, his wife of 72 years, Rocco is survived by his sons, Leonard Ciavarella of West Haven, and Rocco Ciavarella Jr. and his wife Gale of Waterbury; his daughters, Felicia LaRosa of Waterbury and Anna Carlson and her companion Dean Sidowski of Waterbury. Rocco also leaves behind his grandchildren, Leonard Ciavarella, Jr. and his wife Lisa, Lynn Ciavarella, Sheila Murray and her husband Dan, Jason Carlson and his wife Jenn and Jessica Carlson; his great-grandchildren, Leonard III, Vincent, Anthony, Ethan, Jared, and Willow Grace and his sister, Maria Ciavarella of Italy as well as several nieces and nephews all of Italy. Rocco was predeceased by his daughter-in-law, Amelia Ciavarella and his son-in-law, Victor LaRosa.

Rocco’s family would like to thank the staff of Village Green for the compassionate care shown to Rocco during his long stay.

The funeral will be held on Monday, April 13, 2015 at 9:00am at Maiorano Funeral Home, 95 Willow St., Waterbury with a service from 10:00-10:30am. Burial will follow in Calvary Cemetery. Family and friends may call at the funeral home on Monday morning from 9:00-10:00am. For more information and online condolences visit www.maioranofuneralhome.com