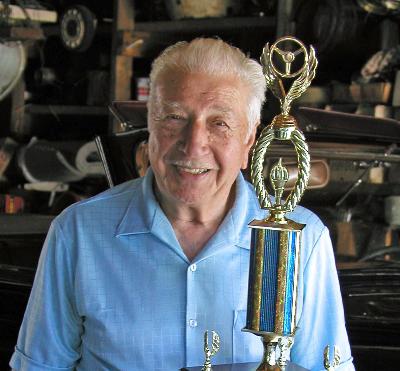 Frank Salvatore Scaduto, lifelong resident of Bridgeport, passed away on Sunday, April 5, 2015 at the age of 92. Frank was born on March 27, 1923 in Bridgeport to Salvatore (Sam) and Agatha (Latarga) Scaduto. He enlisted in the U. S. Army in 1943 and fought in World War II in the Battle of the Bulge and the European Theater. He was honorably discharged in 1946. During his service, he earned three Battle Stars, a Citation for participating in liberating 800 Prisoners of War, a Victory Medal, American Theater Campaign Ribbon, Good Conduct Medal, European African Middle Eastern Theater Campaign Ribbon and World War II Victory Medal. Once Frank returned to Bridgeport, he married Daisy DeLucia on April 26, 1947. Once married, Frank and Daisy began building the home they raised their family in and continued to live in for 67 years. He worked at Bridgeport Brass Company as a tool and die maker and then later as a truck driver for 40 years. Frank began his second career working at Dragone Classic Motor Cars. Besides the love and pride for his family, the restoration of his 1936 Ford Convertible Coupe with a rumble seat, was his lifelong hobby. After retirement, he spent much of his time at Classic Car Shows. He earned 33 “Proud” Trophies for his pride and joy. Frank was a family man, a true hero, who took great pride in helping others. Everywhere he went, he either knew someone or made a new friend. He liked to “talk”. Everyone who knew him, knows he only told it like it was. He never missed a trick. He will be missed dearly by family and friends, as he held a special place in everyone’s heart and touched so many people’s lives. Survivors include: siblings, Adeline (Lombardo) Guzzi and Josephine (Scaduto) Machalowski and her husband Frank, two children, Patricia (Scaduto) Zappulla and her husband Tony and Frank Scaduto and his wife Kathey, grandchildren, Brian Howard and his wife Jennifer, Cherie (Howard) Maheu, Luci (Santos) Wright and her husband Bobby Sr., Americo Santos III, Michael Scaduto and his wife Sia, Rebekah (Scaduto) Percival and her husband Justin and Cassondra Scaduto, great grandchildren, Abby, Matt, Josh, Alex, Nolan, Jordan, Jakob, Ryder, Bobby Jr., Austin, Jasmin and Ross. He had many nieces and nephews who knew him as “Uncle Cheech”, he was very close to and loved them all as if they were his own children. Frank was predeceased by his beautiful wife, the true love of his life, Daisy (DeLucia) Scaduto, his beloved daughter, Lorraine (Scaduto) Santos and son-in-law, Americo Santos Jr., as well as his siblings, Joseph Scaduto, Joseph Lombardo, Frank Lombardo, John Lombardo and Nancy (Scaduto) Intagliatto. Funeral services will take place on Tuesday, April 14, 2015 at 12:00 p.m. in the Abriola Parkview Funeral Home, 419 White Plains Rd., Trumbull. Interment will follow with full military honors in Mountain Grove Cemetery, Bridgeport. Relatives and friends may call on Monday from 5-8 p.m