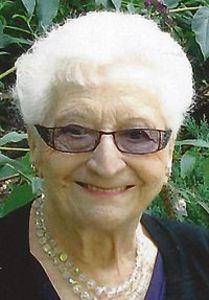 WATERBURY — Mrs. Angeline “Rose” Rosato, 94, passed away peacefully surrounded by her family on Tuesday, Feb. 24, 2015, at Waterbury Hospital after a brief illness. She was the devoted wife of the late Frank M. Rosato.

Mrs. Rosato was born on Jan. 31, 1921, in Waterbury, daughter of the late Giuseppe and Maria (Durante) Barbieri. Rose attended area schools and was employed by many area factories and worked at Scovill Manufacturing during World War II. Through her work experience, she became a skilled seamstress sewing most of her own clothes and those of her children. In 1950, she married and became a stay at home Mom. After raising her family, she returned to work at Timex which was later acquired by Bendix. Upon retiring, she enjoyed many hobbies including bowling, making baby blankets for all her grandchildren, great-grandchildren, nieces and nephews, gardening with her grandson, Christopher, and cooking the Sunday dinner for her children, grandchildren and great-grandchildren, which she continued doing into her 90s. She was also a tireless volunteer for Waterbury Hospital logging in more than 4,000 hours, all of them in the laboratory where her daughter worked. She enjoyed giving neck massages, encouragement, and advice to all her friends in the lab.

Rose is survived by her daughters, Cynthia Solomito and her husband, Michael, of Waterbury, Maria Gagnon and her husband, Jeffrey, of Waterbury, and Frances Spiteri and her husband, Michael, of Wallingford; her four grandchildren, Jeffrey Gagnon and his wife, Linda, Christopher Gagnon and his fiancée, Nicole Lucas, Michelle Spiteri and Elizabeth Spiteri; and two great-grandchildren, Jordan Gagnon and Owen Gagnon. She also leaves her sister-in-law, Jane Barbieri, and her brother-in-law, Mario Rosato and his wife, Angie, of Wolcott, as well as several nieces and nephews. In addition to her husband, Frank, to whom she was married for 60 years, Rose was predeceased by her brothers, Vito and Peter Barbieri, and her sisters, Betty Mendillo, Theresa Mastropietro, Connie Barbieri, and Lena Semeraro.

Rose’s family would like to thank Team 3 and the nursing staff in Telemetry at Waterbury Hospital for their outstanding and compassionate care shown to Rose and the family during her time there.