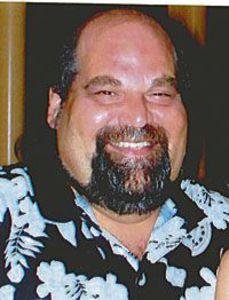 WATERTOWN — Mr. Thomas Gerard Ieronimo, age 55, of Watertown, passed away on Monday, Aug. 25, 2014 at Waterbury Hospital. He was the husband of Helen (Kubik) Ieronimo.

Mr. Ieronimo was born in Waterbury on April 13, 1959, a son of Marie (Venditti) Ieronimo of Waterbury and the late James J. Ieronimo. Mr. Ieronimo worked as an engineer and was the owner of Intergrated Environmental Resources in Watertown.

He was a Corvette enthusiast and a member of the ZR1 Club. He was an avid New York Giants, Yankees and NASCAR fan and was a true patriot.

In addition to his wife and mother, Mr. Ieronimo is survived by three sons, James, Thomas and John, all of Watertown; a sister, Anne Briggs and her husband Allen, of Watertown; two brothers, James Ieronimo of Meriden and John Ieronimo of West Hartford; a niece, Caroline Ismail of Avon; nephew, Gregory Midgette and his wife Shannon, of Del Ray, Calif.; grandniece Lilian Ismail and grandnephew Benjamin Ismail.

A funeral Mass will be held on Friday, Aug. 29, 2014, at 10 a.m. at Our Lady of Mount Carmel Church, Highland Avenue, Waterbury. Family and friends are asked to please meet directly at the church. Burial will be in Mount Olivet Cemetery, Watertown. Calling hours will be held on Thursday, Aug. 28, 2014, from 5 p.m. to 8 p.m. at Prospect Memorial Funeral Home, 72 Waterbury Road, Prospect.

In lieu of flowers, Tom’s family requests that contributions in his memory please be made to a charity of the donor’s choice.

To place online condolences, please log on to www.prospectmemorial.com