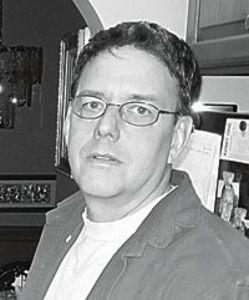 Mike was born in Waterbury, Feb. 8, 1966, son of Mary Lou (Alexander) Dodge of Bethlehem and the late Dennis E. Dodge, who passed away Jan. 3 of this year. He graduated from Oliver Wolcott Technical School in Torrington in 1985.

Growing up he helped his father in the family nursery, Bethlehem Nursery, and after high school worked with his father at Denny’s Auto Body. Most recently he worked as an auto body technician at Ron’s Auto Madness in Bristol.

Mike’s passion and hobby was antique cars, especially his beloved 1957 Chevy. He received numerous awards and trophies at car shows for his completed cars. He won Best Paint at the Frank Marada Auto Show three years straight. He also took first place at Hershey for Amateur Division for his ’57 Chevy.

Mike also enjoyed cooking his favorite recipes for his family and friends’ gatherings.

Besides his mother, Mike leaves his sister, Terri Doucet and her husband Donald, of Wolcott; his brother, Steven Dodge and his wife Caroline, of Watertown; and his four nieces and nephews, Caleigh Dodge, Jamie Dodge, Lauren Doucet and Dennis Doucet.

A memorial Mass will be celebrated Saturday, May 31, 2014, at St. Mary Magdalen Church, 16 Buckingham St., Oakville. Burial is private and at the convenience of the family. There are no calling hours. Arrangements have been entrusted to Hickcox Funeral Home, 195 Main St., Watertown.

In lieu of flowers, memorial donations in Mike’s name may be made to Watertown Volunteer Fire Department, 935 Main St., Watertown, CT 06795.

For additional information or to leave an online message of condolence, please visit www.hickcoxfuneralhome.com.