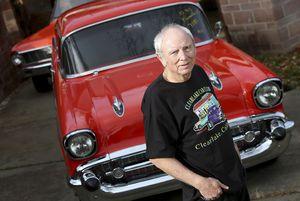 LAKEPORT, Calif. — Three decades after it was stolen, a 1957 Chevrolet Bel Air has been returned to a Northern California man — in better shape than when he originally owned it.

The Santa Rosa Press Democrat reports Ian “Skip” Wilson was shocked to get a call from the California Highway Patrol informing him that his long-lost Chevy was taken off an Australia-bound cargo ship.

The 65-year-old says the car has had a lot of work done on it since it disappeared from his Lake County home in 1984. It was returned with a monogrammed interior, 17-inch racing wheels, rack-and-pinion steering and a 350-horsepower V-8 engine.

The retired mechanic says the two-door was in sorry shape when he bought it for $375 in 1975 with plans for fixing it up.