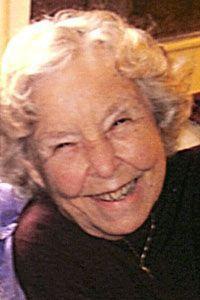 She was born Oct. 20, 1919 in Brooklyn, N.Y., the beloved daughter of Frederick and Sydney Blades, now deceased. Sydney attended Epiphany Episcopal Church of Cape Coral, Fla. and was a member of St. Paul’s Episcopal Church in Woodbury, Conn.

She was the definition of class, elegance, warmth and compassion. She could fill a room with her smile. She always had a way of making you feel like the most important person when she spoke to you. She really cared what you had to say and was quick to give praise and laugh with you.

She could remember facts and details about everyone’s life and would make sure to follow through to see how things were. She valued everyone, and really cared.

She graduated from Adelphi University in Garden City, N.Y. She was a member of the Tri Delta Sorority. She earned her master’s degree in education from Western Connecticut University in Danbury, Conn.

Sydney retired from Baldwin Elementary School as a second grade teacher. This was her calling. She treated her students as though they were her own children. She was fair yet firm.

Sydney had a passion for writing and recently a writing club was started at Gulf Coast Village, a retirement community where she lived in Cape Coral, Fla. She was very proud and excited about this because she suggested this to the activities director.

Sydney overcame tragedies and kept going with grace and dignity time after time. Everyone was in awe of her. She made it look so easy. Sydney was the most positive person. She never complained and was truly resilient.

Funeral services will be held Thursday, Sept. 5, at 11 a.m. at St. Paul’s Episcopal Church, 294 Main St. South, Woodbury. Burial will be in New North Cemetery, Woodbury. Calling hours will be held Wednesday, Sept. 4, from 5 to 8 p.m. at the Woodbury Funeral Home of Munson-Lovetere, 2 School St.