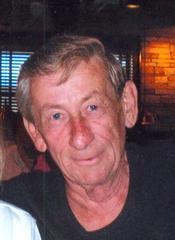 Thomas George Botelle, 70 of Waterbury, Connecticut and Stuart, Florida, died Saturday, October 6, 2012 at Waterbury Hospital. He was the husband of Phyllis (Petta) Botelle.

Tom was born in Waterbury on March 19, 1942, son of the late George and Marie (Hoffman) Botelle. He attended Fort Pierce College in Fort Pierce Florida, and Valdosta State College in Valdosta, Georgia. He served in the U.S. Air Force from 1961 to 1964. He was employed at ITT- Selectro in New Britain for 15 years. He was a member of the Masonic Union Lodge 96 in Thomaston. He enjoyed fishing, NASCAR, especially Jeff Gordon, Corvettes, lobster dinners, spending time at his Kingswood condo in Florida, but most of all he enjoyed Thanksgiving Dinner at his home surrounded by his family. He will forever be remembered sitting in his chair, in the driveway, waving and “shooting the breeze” with family and friends alike.

Besides his devoted wife Phyllis of 37 years, he leaves three sons, Larry Botelle and his wife Stephanie of Waterbury, Thomas Botelle Jr.and John Botelle both of Florida, a daughter, Karen Botelle of Florida, a brother, Jimmy Botelle of SC, three grandchildren, several nieces, nephews and cousins. He also leaves an aunt Elaine Botelle of Bethlehem. He was predeceased by his brother, David Botelle. He also leaves behind his beloved furry friend Rocky.

In lieu of flowers contributions may be made to SS. Peter & Paul School, 116 Beecher Ave. Waterbury, CT 06705