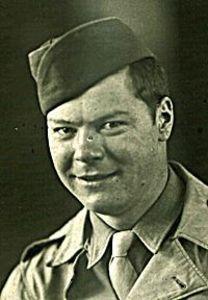 NAUGATUCK — Mr. Andrew Doback, age 88, of Naugatuck, died Tuesday, March 20, 2012, at the Masonic Health Care Center in Wallingford. He was the husband of Mary (Sousa) Doback.

Mr. Doback was born in Naugatuck on Nov. 26, 1923, a son of the late Charles Doback and the late Mary (Brenia) (Doback) Borsos. He was retired from the Uniroyal Inc. Footwear Division in Naugatuck and was a communicant of St. Francis of Assisi Church in Naugatuck. He enjoyed making and repairing clocks, woodworking and antique and classic cars. He was a member of the Roaring ’20s Antique and Classic Auto Club, the Watch and Clock Association and the Naugatuck Historical Society.

Mr. Doback was a World War II veteran having served in the United States Army Air Corps stationed in Iceland.

A funeral Mass will be held on Saturday, March 24, 2012, at 9 a.m. at St. Francis of Assisi Church, 318 Church St., Naugatuck. Family and friends are asked to please meet directly at the church. Burial with full military honors will be in St. James Cemetery in Naugatuck. Calling hours will be held on Friday, March 23, 2012, from 6 to 8 p.m. at the Buckmiller brothers Funeral Home, 82 Fairview Ave., Naugatuck.

In lieu of flowers, memorial contributions may be made to the Naugatuck Historical Society, P.O. Box 317, Naugatuck, CT 06770.

For more information and online condolences, please log on to http://www.buckmillerbrothers.com/.