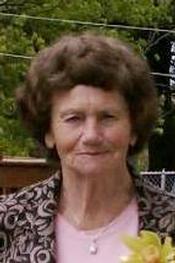 Margaret “Peggy” A. (Benson) Falcone, age 76, of Waterbury, passed away peacefully surrounded by her family on Tuesday, February 21, 2012 at her home. She was the devoted wife of the late Pasquale J. Falcone, Sr.

Mrs. Falcone was born on July 9, 1935, in Waterbury, daughter of the late Ernest and Ann (McDermott) Benson. Margaret was a member of the Red Hat Society. Peggy was the proud owner of a 1965 Buick LeSabre and attended area car shows where she and her car won many trophies. She was a loving homemaker who enjoyed cooking, baking and working in vegetable garden; a few of her many passions that she shared with her grandchildren Hailey and Tyler. Margaret won many ribbons for her baked goods and vegetables at the Wolcott Fair over the years. Margaret was a fan of Elvis Presley and spent many fun times at the Old Corner Café watching Brian, an Elvis impersonator who also made an appearance at her birthday party. She enjoyed traveling; her favorite trip was to Memphis to Graceland and day trips to the casino with her daughter, Sharon, who was her constant companion and caregiver during her illness and Quassy Amusement Park with her great-grandchildren, Lasenia and Nasaiha. Margaret was also an excellent amateur photographer and submitted several photos to the newspaper of the beautiful birds that would visit her many birdhouses daily.

A funeral will be held on Thursday, February 23, 2011 at 9am from the Maiorano Funeral Home, 95 Willow St., Waterbury to the Basilica of the Immaculate Conception for a Mass at 10am. Burial will follow in All Saints Cemetery. Family and friends may call at the funeral home on Wednesday evening from 5-8pm. Memorial contributions in Margaret’s name may be made to: VNA Hospice, 50 Brookside Dr., Waterbury, CT 06708. For more information and online condolences visit www.maioranofuneralhome.com