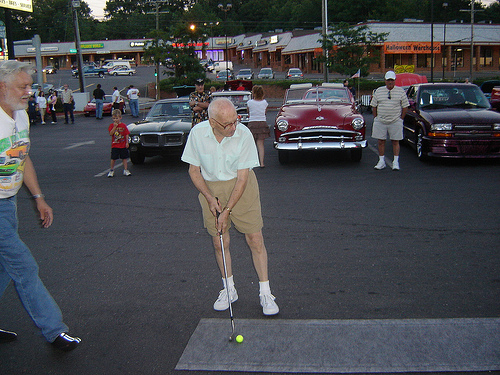 Mr. Ralph Laudano, 92, of Pritchard Road, passed away peacefully surrounded by his devoted family on Monday, May 10, 2010, at Saint Mary’s Hospital. He was the husband of the late Mary (Coppola) Laudano.

Mr. Laudano was born on June 17, 1917, in Waterbury, a son of the late Francesco and Severina Trapasso Laudano. During the ages of 2 through 17, Ralph lived and was educated in Amalfi, Italy. After returning to Waterbury in 1934, he quickly became employed by Lux (Robert Shaw) Clock Factory, where he worked for 43 years until his retirement. He attended Croft for night classes studying photography and architecture. Together with his wife of 60 years, Mary, Ralph built Ralph’s Variety Store in Waterbury which they operated for 18 years.

Ralph was a car enthusiast and enjoyed attending car shows. He won many awards for his 1960 “all original” Chevy Impala. He was well known for his nativity creche and Christmas village that he crafted by hand on the porch of his home. It included a collection of more than 200 figurines imported from Amalfi. He was a wonderful father and an adoring grandfather. He will be forever missed by his family and friends.

Ralph leaves behind his son, Francis A. Laudano and his wife, Nina, his daughters, Sara Salgado and her husband, Artur, and Ann Marie Laudano, all of Waterbury; five grandchildren, Marco, Roberto and Paulo Salgado, Mary Laudano Graveline and Carla Salgado Ackels; three great-grandchildren, Victoria, Sade and Sofia; a sister, Angela Lewis of Beverly Hills, Fla.; a brother, Anthony Laudano of Longs, S.C.; and several nieces and nephews. He was predeceased by his brothers, Louis and Andrew Laudano.

A funeral will be held 8:30 a.m. Friday, May 14, 2010, from the Maiorano Funeral Home, 95 Willow St., Waterbury, to SS. Peter and Paul Church for a Mass at 11 a.m. Entombment will immediately follow in Calvary Garden Mausoleum. Family and friends may call at the funeral home on Friday morning from 8:30 to 10:30 am.